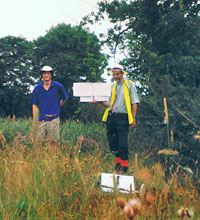 In September 1983, the Department of the Environment (DoE) announced a research contract for ‘the Monitoring of Landscape Change’. As the tender specification explained, the increasing public notice taken of landscape change had highlighted the overall lack of consistent and reliable statistics from which the effectiveness of existing policies, and the need for new ones, could be gauged.

DoE shortlisted two tenders. The ITE tender proposed a sampling framework based on 256 1km squares employed by the 1978 Survey, and the use of recent and earlier air photographs. As the DoE later indicated, the tender was not only considerably more expensive, but the statistical basis was so complex as to make it difficult to place confidence limits on the information collected. The contract was awarded to Hunting Technical Services (1984), which proposed a combination of air-photographic interpretation and the sampling method already used by the Forestry Commission in its census of non-woodland trees.

ITE had three choices: it might withdraw from that area of activity; research only the methodology and techniques; or continue to demonstrate, by example, more cost-effective ways of measuring change in land cover and landscape features.

Despite considerable funding difficulties, the ITE concluded in March 1984 that a further Ecological Survey of Great Britain should be carried out. A comparative study of the scale and nature of change since the 1978 survey, and the establishment of a more comprehensive dataset with which to measure future change, were of strategic importance. The number of 1km sample squares was extended from 256 to 384, with the field survey undertaken by teams from each of the six ITE research stations. Not only did the survey largely confirm trends already recorded by the annual Agricultural Census, but also it further demonstrated how changes in such attributes as hedgerow length could be detected, even with such a small sample size.

The ECOLUC Project: the birth of the Countryside Information System (CIS) 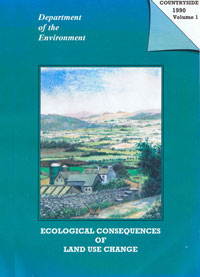 The Department of the Environment awarded a contract to ITE in 1985 that enabled statistics derived from the Hunting Technical Services data to be interpreted within the ITE Land Classification System. The contract was in response to the significance of habitat quality or land-cover type as a measure of change in countryside, and the potential of the ITE approach in providing such a measure.

A year later, the Ecological Consequences of Land Use Change (ECOLUC) project was developed, which aimed, amongst other things, to develop predictive models required by policymakers to better understand the implications of countryside change. A sketch of an ‘ideal’ landscape was published for each land class, providing policymakers with a visual representation of the landscape consequences of different land-use strategies.

A further module on expert systems and their application in ecology concluded that information systems were more appropriate in the policy context. A further contract was awarded to ITE in order to develop a pilot information system, which quickly became known as the Countryside Information System (CIS).